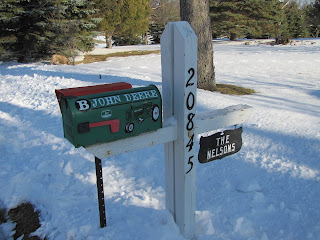 We drove 833 km today because we wanted to make it on time at John and Sally's for supper. John and Sally are Annette's parents (and yes they are Tim's inlaws by default). 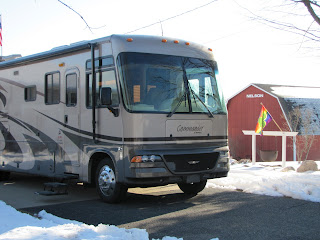 There was quite a bit of snow in Paris and it got as low as -9 Celcius during the night. Luckily for us, our hosts were fantastic and we slept in Annette's bed. We later learned that Tim was supposed to be renting that room when he first started courting Annette...John said that he never saw a dime of the rent money and on top of it all...Tim stole Annette from them!! Shame on you Tim! 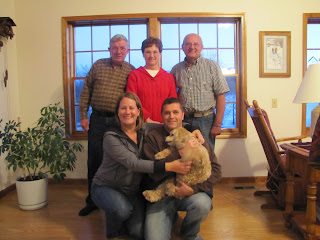 After we got fed like kings and queens, we visited the lovely place...just beautiful! 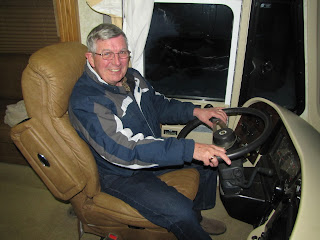 John got excited when he got behind the wheel!! The driver seat suits him well!!
Posted by Kouisse at 11:53:00 AM No comments:

Snowed in in St. Louis - Missouri 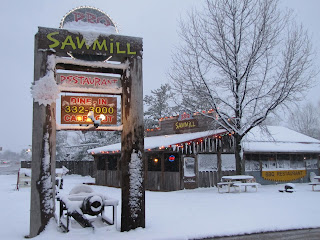 We had to move to a real campground because we needed some serious heat for the motorhome. The Casino parking lot with no utilities was just not cutting it for us any more. Temperature was not cooperating so we adapted. 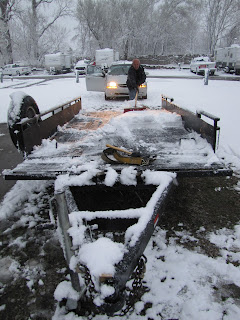 Tomorrow, we would like to make it to Paris in Michigan. We wanted to hit the road early enough so we decided to get ready the evening before departure. There was so much snow that we had to clear the trailer before we could load the car on. George is doing the hard work while I take pictures... 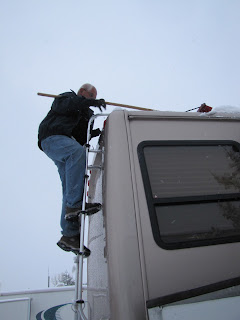 There was so much snow on the roof that the pull-outs had to be cleaned before we could retract them. As you can see, George is doing the hard work again while I take pictures!! 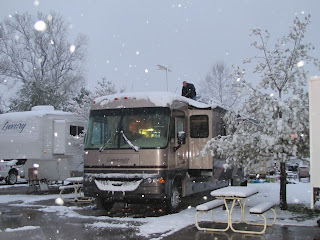 See the snow coming down !!! You can play the "Where is George in Missouri" game if you want...HINT: roof. George is still doing the hard work while I take pictures....I just love my life Ah!
Posted by Kouisse at 9:06:00 AM No comments: 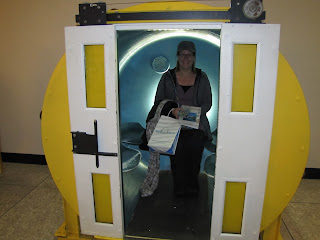 Kouisse is getting special training for the capsule that will bring her to the top of the Arch...630 feet high! 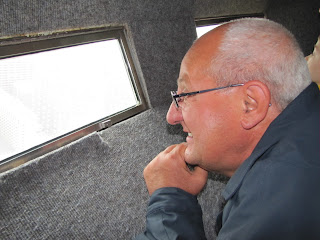 George made it to the top without training and he likes the Dandy view!! 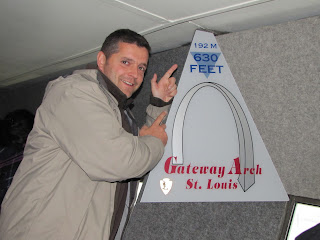 Bidou it proud to be up there too! 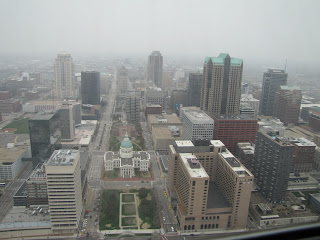 What a Dandy view indeed!! You can see the old Court House (in the center) - a Dandy view from a window at the top of the Arch
Posted by Kouisse at 6:18:00 PM No comments:

Fantastic visit at the Cahokia Mounds near St. Louis Missouri (click on the title) 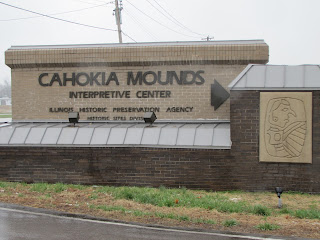 One of the greatest cities of the world, Cahokia was larger than London was in AD 1250 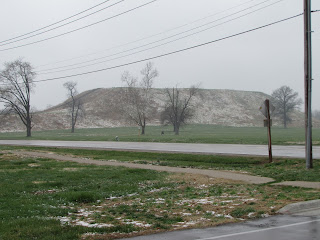 Monk Mound was man made (as were the other 71 Mounds in the area) and it was the highest point in the city of at least 10,000 citizens 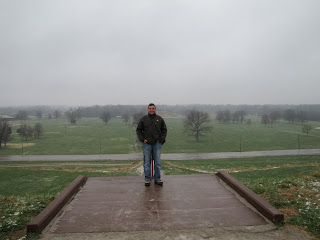 The view from up Monk Mound was fabulous! Thanks for the picture George! 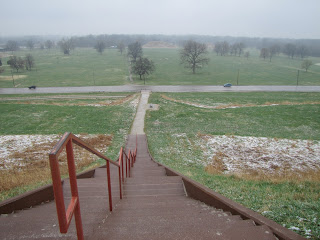 Look at the cars below...they are way small. We felt like we were on top of the world...not bad for a man made mountain! Who said that men couldn't move mountains??
Posted by Kouisse at 5:59:00 PM No comments: 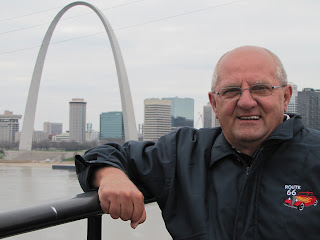 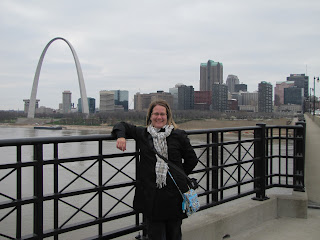 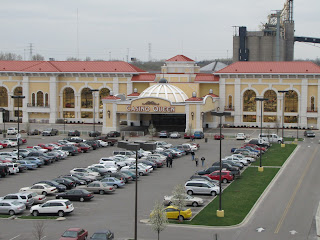 Nice and sunny when CC Top arrived at the campground but...it was closed for the season even if our tourism books stated that it was opened year around...we had to camp in the parking lot the old fashion way! 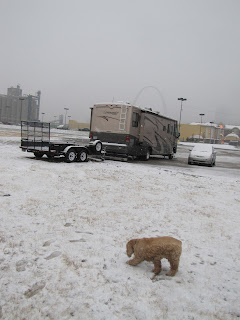 But the next morning, we woke up with a -4 Celcius and a couple inches of snow...reality is kicking in!! Even Camille seems to enjoy the snow.
Posted by Kouisse at 5:48:00 PM No comments: 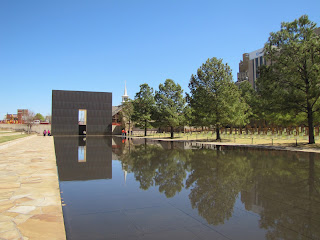 Our first stop after leaving Dallas TX was Oklahoma City in order to visit the Memorial for the 168 people killed on 19 April 1995 when a car full of explosives went BANG! 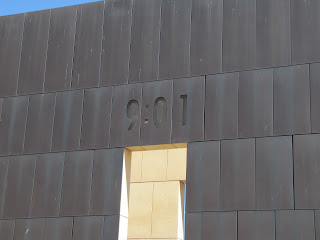 The explosion took place at 09:02 am and nineteen of the victims were small children and babies in the day care center on the second floor of the building 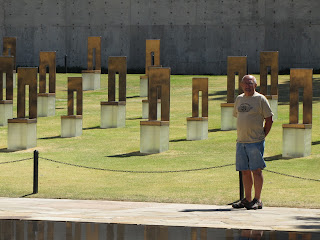 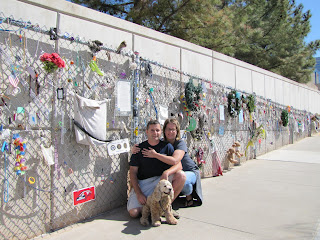 Many friends, family members and pure strangers are leaving "momentos" in order to keep the tragedy alive in their heart...Tragedies like that should never happen!
Posted by Kouisse at 5:34:00 PM No comments:

Last meal in Texas before heading back home !! 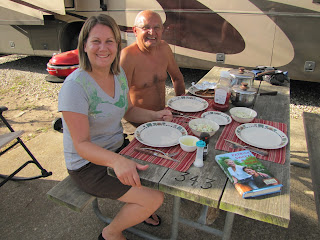 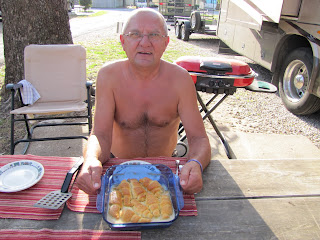 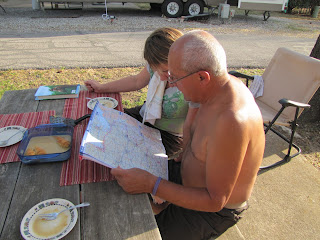 After dinner, the routine and reality kick in ...we need to plan our trip for the next day...335 km to Oklahoma City 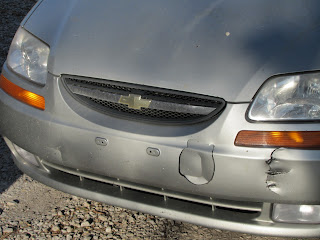 How many time can a small car like ours be hit by a trailer hitch? Can you spot our most recent hit...it happenned while in Arizona?
Posted by Kouisse at 11:51:00 PM No comments:

Kouisse - a now 40 year old female - I cannot believe that I am 40 years old... 40 sounds so so old!!! Sorry to all the 40's year old out there!! I am still trying to finish (it's been 5 years now) my DEP secrétariat by correspondance. Hobbies include crocheting dischcloths and mini-dishcloths and talking with her daddy on the telephone.
Kouisse's contact info is kouisselemieux@hotmail.com

Camille - a 13 year old cocker spaniel female dog. She was adopted at the SPCA in Gatineau when she was only an 8 month old puppy. She is the joy of Bidou and Kouisse's lives. Hobbies include sleeping, chasing the squirrels, guarding CCTop and riding in the car with Bidou.

CCTop - a 5 year old Triple E - Commander motorhome that we bought last May and delivered in July 2009. Her lenght is 37 feet and she is a beauty. We named her CCTop in honor of Camille (hint - Commander Camille).

George - also known as DG (Dandy George) - the oldest and the dandiest member of this blog. Note that he will be travelling in CCTop only part-time!!!
George's contact info - none since he is still trying to figure out how to turn on a computer! :)